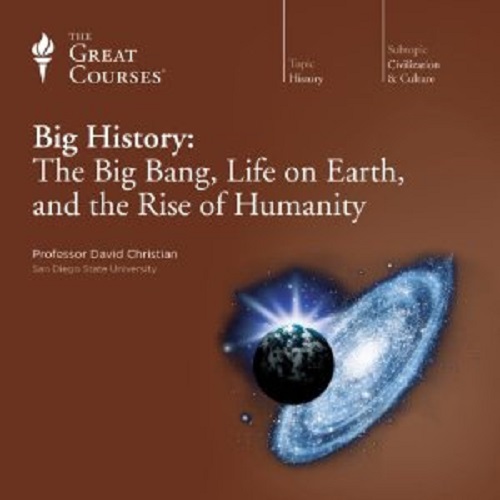 Would you recommend this audiobook to a friend? If so, why?
I’d recommend this course to anyone interested in history as a whole, since it really does cover all (or almost all, see additional comments :-p ) 13 plus billion years of the universe.

Who was your favorite character and why?
Uh… guys… this is a history course. There are no “characters” as such. Someone proofread these questions, hunh? :-p

What about Professor David Christian’s performance did you like?
He’s very clear, talks well, and has a cute accent. What more could we ask for in a lecturer?

If you could give Big History a new subtitle, what would it be?
13 Billion Years in 24 hours

Any additional comments?
I quite enjoyed this course. As with most courses, I did skip lectures here and there of the stuff that I wasn’t really interested in (like the lecture titled What is Agriculture? *yawn*). There was one thing that kinda pissed me off, though, and that was the total omission of dinosaurs. He never even said the word, he just simply skipped them. That’s a half billion years gap. How can you do Big History without even mentioning them? In fact, I almost stopped it at that point, I was so irked. A month went by before I picked it up again. And that’s why it gets 8/10 instead of 10/10. I still do recommend it though, despite the missing dinos.

Welcome to a Goth girl's world.