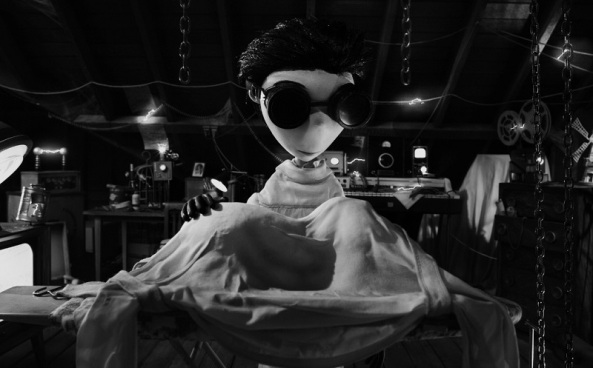 So I finally saw this film. It’s been months now that I hardly watch movies anymore. I used to watch a few a week, now I’m lucky to watch one a month. But I digress… This film is a breath of fresh air coming from Tim Burton. His films have just been so tired lately, all style and no substance, so despite how cute the trailers for this film looked, I was reluctant to watch. But I’m glad I finally did, because it was quite fun. It’s a touching story of a boy and his dog… his undead dog, hehe. There are winks to classic horror films all over the film, from the obvious main plot and character names, to smaller things, like the way the science teacher looks and sounds like Vincent Price. Like the Asian kid making a giant reptile who stomps on cars. Like the poodle with Bride of Frankenstein fur. And etc, and etc. It had a few really sad scenes, and I actually laughed out loud a few times, they got some good gags in there. All in all, a fun little film, I reccomend it if you like weird stuff. And if you don’t, well, I reccomend it anyways. Who knows, you may be surprised! I give it a solid 8/10.

This film is not currently on Netflix, nor did I find it on YouTube. But if you’ve got Video on Demand, it’s playing there. Enjoy! 🙂